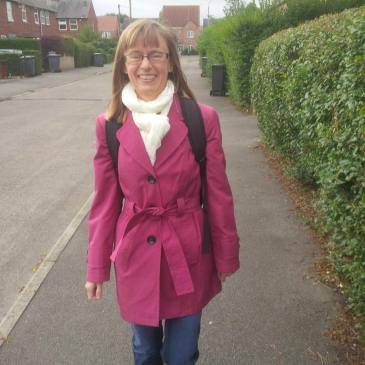 We decided to give the car up for multiple reasons; we were mostly only using it for longer journeys – taking a car into the centre of York is not a good option. We were already walking a lot and starting to cycle more, and feeling fitter as a result and pleased to be contributing less to poor air quality. Additionally, we were keen not to be spending money on something that spent most of any given month parked up and waiting for us to use .. an expensive convenience.

We were helped by really needing to cut back on our expenditure, living on a sustainable development (Derwenthorpe) and, particularly in my case, disliking car journeys so much.

The barriers were a combination of practical and emotional ones; practically how would we get to venues for our work with lots to transport and how would we get to see my Mum easily who lives in the Midlands? Emotionally, it was partly other people! They imagined difficulties and clearly it was envisaged by some as being a step down; it’s not what ‘successful’ people typically do. Overcoming them was easy in respect of the practical barriers; we could hire cars when needed (and a neighbour often lends us theirs!). We can get trains to the Midlands (and we really enjoy the journey now). But the emotional part, passed on from other people, had to just be accepted and lived with until they were able to see that it isn’t a big problem! It made us very aware of how walking long distances (more than, say a mile) is considered impractical, barely possible, undesirable etc!

Not having the car really does increase one’s sense of freedom. You can’t worry about a car you don’t have, whether it’s how much the next service is going to cost, or keeping it ‘safe’ from damage / theft. It’s assumed to be a freedom to have a car, but that may be confusing freedom with a notion of convenience, a convenience which is compromised through congestion and, for us, contributing to air pollution. Train travel for long distance journeys is infinitely more enjoyable and sociable than sitting in heavy traffic on our motorways. There’s an enjoyable sense of physical tiredness after a long day out, rather than stiffness and knowing that you’ve been sedentary, and not surprisingly, we’re experiencing much better fitness.

York is quite an easy city to live in without a car. Public transport is good (I used to live in Barrow-in-Furness!), there are cycle tracks and plenty of others cycling, and any distance within York is possible on foot for anyone who’s willing and able to walk more.

The biggest hurdle is getting round to giving it up; it feels like such a big thing … until you do it.